“Off-Key” Chorale is a partnership with Neuro Challenge Foundation, Inc., Key Chorale of Sarasota, FL,  and Artist Series Concerts of Sarasota with the support of the Sarasota Memorial Institute for Advanced Medicine (IFAM). The chorus, comprised of Parkinson’s patients and their families  is led by Key Chorale Artistic Director Joseph Caulkins and accompanied by Artist Series Concerts co-founder and artistic director, Lee Dougherty Ross.

I’ve been fortunate in my life to have had many mountaintop experiences from standing atop Grand Teton in Wyoming to the snowy summit of Europe’s 15,578-foot Mont Blanc. Surprisingly, my most recent mountaintop experience didn’t come surrounded by jagged rocky pinnacles, but instead in an unassuming exercise room at the end of a long hallway in the Sarasota Memorial Institute For Advanced Medicine.

Once a week as the sweaty stretch class exits, volunteers rush to set chairs, bring in a keyboard and music stands and within minutes the exercise room is transformed into a rehearsal hall. The 40 seats are quickly filled as singers from all over the county take their places knowing what most choirs do; there is something magical, something empowering, when one voice joins another. Suddenly the sum is greater than the individual parts, and we are better for the effort, the experience, and just the plain fun of it.

But this choir, called the “Off-Key” Chorale, has a unique reason for coming together every Tuesday. Our members consist of Parkinson’s disease patients and their caregivers. There’s Dr. John, Shirley, Peg and Dick who also sings in a doo-wop group. Singers from my auditioned Key Chorale join us to offer support and encouragement. Most of these singers have a personal connection with Parkinson’s disease; a father or brother, sister-in-law, best friend or a spouse that make up the 1.5 million Americans diagnosed with PD. There are 9,000 people in Southwest Florida alone and another 5000-10,000 directly affected as professional or family caregivers.

Over the past summer I was approached by the President of the Neuro Challenge Foundation, Doreen T. Sutherland, and Executive Director, Judith Bell, about their dream of creating a PD choir in Sarasota. Parkinson’s is a chronic, progressive neurological disease marked by tremors or trembling, rigidity, slowness of movement, and difficulty with balance. As the disease progresses, patients lose volume and clarity in their speaking voices. A handful of choirs like this have been witnessing great results from Portland, Oregon to Auburndale Massachusetts and Washington D.C. to Tallahassee, Florida – so why not Sarasota?

Judith sent me a Washington Post article “Singing and flying in the face of disease” to give me some background. My wife and I cried as we read the inspiring and hopeful story of Phyllis Richman and how simple activities I take for granted brought immense fullness to her quality of life. “Gradually in the past decade, as Parkinson’s has narrowed my life, singing and other efforts to manage Parkinson’s have expanded it.”

Even though I was already conducting five ensembles and was terribly busy, I knew I couldn’t say no this opportunity. I had the teaching skills, a strong understanding of vocal pedagogy, 25+ years of choral conducting background, and a strong desire to make a difference in their lives. We quickly agreed on the “Off-Key” Chorale motto: No pressure, No expectations, Just Fun.

Maybe it was because both the singers and I were taking a leap of faith together that made this experience work so perfectly. I had some idea of what music I would teach, and what exercises would be good to help them with breathing, production, and volume, but beyond that, this would have to be a very fluid process adapting as we went along. For the singers, their leap of faith was quite different. Sure some had sung in choirs before, but many had not at all. Some could read music and others couldn’t.  But they were willing to try something new, something you would think Parkinson’s would have taken from them – singing. They were hoping music could give them a mountaintop experience.

As they entered the room and received their packets of music it became immediately apparent to me they had begun their personal ascent of this mountain. Parkinson’s can be a very isolating disease. As it progresses, the voice gets softer and softer making even conversations with caregivers a challenge. Stepping out from this isolation, signing-up for the class, getting in the car, making their way down the long hallway, and not knowing exactly what to expect required a hundred small steps. As a mountaineer I know the journey is long, that along the way it’s always easier to turn back and head home. But I charge ahead knowing that what awaits is an experience that is worth a thousand small steps.

It was inspiring standing in front of 40 new singers unwilling to let Parkinson’s diminish their experience. Some stood, other sat as upright as they could, as we began to work together on posture and breathing. I instructed them that singing is really prolonged speech and that if they applied these singing techniques to their daily lives, over time it could add volume and strength to their voices. The first note we sang together was just an “Oh” on a G. It was pretty rough sounding, not very unified, not well supported – But it was LOUD! 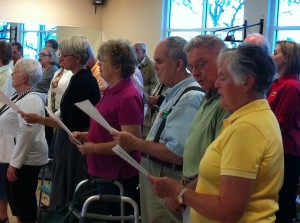 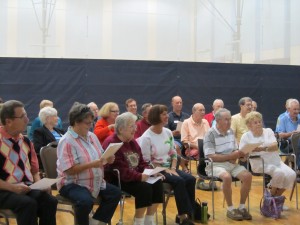 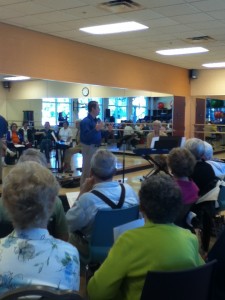 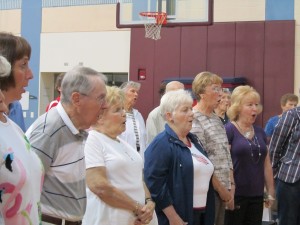 Soon we had sung our first song, “My Country, ‘Tis of Thee”, and the sound of the choir was improving measure by measure. Each singer doing the very best they could, with the voice they had, each phrase getting a little better than the last. With each and every step, they climbed higher and higher and soon the valley of Parkinson’s was well below them. They were no longer patients, but singers enjoying a synergy created by working together.

At the end of the first class, having only been together one hour, the “Off-Key” Chorale sang “Edelweiss” from The Sound of Music. The joy on their faces and the glorious sound they were making was a mountaintop musical experience for all of us. It was a panoramic view achieved through dedication, courage, love of life, and a caregiver at the other end of the rope.

As we were packing up after that first rehearsal, Lenny, one of the singers and a PD patient himself, came up to me and asked if I had noticed all the smiles, expressions, and laughing that was prevalent during our first session. I said, “I sure did, they all seemed to be having a really great time!” Then he reminded me that one of the symptoms of Parkinson’s disease is that a person’s face is not as expressive as it once was, and sometimes resembles a fixed mask. On this special day, there were smiles all around and I was thankful for my front row seat seeing the power of music making a vital difference in people’s lives.

January 11 • 5:00 – 6:30 PM $30 per person / Click to Reserve Joseph Caulkins is known for his adventurous and bold programming for Sarasota’s Symphonic Chorus. World premieres, […]

Comments Off on Alexander’s Feast by Handel

Comments Off on Sarasota Choral Festival

Who Lights the Spark?

If I had to come up with the most important aspect of my work as a conductor you might not immediately guess, it would be the time and energy I […]