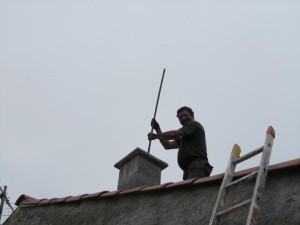 When I heard the knock on the door today I immediately thought it would be the mason regarding the roof tiles. Much to my surprise it was a sooty, dark-haired man offering door to door chimney sweeping service. Really? Apparently, yes. He stated that insurance requires yearly cleaning of chimneys, which was corroborated by our Danish neighbor, Poul. So…since we had no idea of when the chimney may have, if ever!, been cleaned…sure, why not. And to see an actual chimney sweep in action – well, what could be better? So inside he came with an armful of brushes and a shop-vac, he set down a drop-cloth  gently emptied the fireplace of kindling waiting to be burned, and went to work cleaning and vacuuming. But that’s only part of the service ~ up on the roof he climbed and stuck a giant biffy brush down the chimney a la Dick Van Dyke in Mary Poppins. It was AWESOME! And now with our completed certificate of Chimney Sweepdom for 2012 we’re all set in case of an inspection.

So what is this about the roof tiles, you may ask? Seems there was a rather big wind some weeks back and our neighbors noticed we’d lost a tile or two off the roof. It just so happens that Pierre, down the street, is having repairs done to his roof so we set about inquiring if they could take a look at our roof and offer an estimate for repairs from the wind damage. Open ‘Can of Worms’ #A.  Much to the great puzzlement of neighbors Poul & Pierrot, Joe & me, and the young man on the roof looking over the tiles….they’re not actually ‘attached’ to the roof, but just sort of placed neatly one on top of the other in a lovely visual pattern. The whole ‘using adhesive, cement, stick-um….anything! just never came into play. They called it a quick slap job ~ very unusual, very suspicious, quite unscrupulous. *sigh*

The head contractor has yet to come back over to give us an estimate for repairs, but I sense a lightening of my bank account is about to occur. Whether there is any chance of recourse against the previous owner, or for that matter against the inspector for the sale of the house to us…well, we’ll see but I’m not optimistic.  I’ll say this: never a dull moment here, so I keep my sense of humor close at hand and shrug my shoulders in ‘what can you do?’ fashion.

….but the fireplace looks AWESOME! 😉