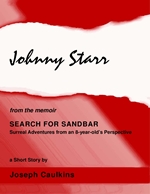 To say that Johnny Starr is a colorful character is an understatement. A combination of Johnny Cash, Wayne Newton, and Rodeo Clown with a knack for telling stupendous tall tales, Joe’s grandfather was never at a loss for words when telling folks how it’s done, how it should’ve been done, and why YOU are an idiot!

No one wants to see their grandfather in his underwear – BEEP. Especially – BEEP, in an airport. John LaVerne Santee, better known by his stage alias Johnny Starr – BEEP, is my granddad. And to my childhood horror, there he was, down to his skivvies and undershirt, surrounded by quite a gathering of airport security.

Johnny Starr has a look. You know what I mean, some people have a look, and others don’t. Johnny Starr has his own unique look. Slicked back jet-black hair, painted on Wayne Newton mustache, big tinted glasses, and…the Pipe. The pipe has become legendary in my family. Everything revolves around where the pipe is, when it’s lit, when it’s not, and who’s taking the pipe wherever it needs to go.

The pipe accompanies John wherever he goes: cafeterias, hospitals, elevators, old folks homes, and airports. But be ready, because the moment someone tells him he can’t smoke in a particular place, the gloves come off and the battle ensues. Not a little battle, but the room clearing type with lots of expletives and a few errant swings. Now any argument involving my grandfather always involves his favorite cuss-word of all-time, JeezzuhsCChrist! Early on, Johnny learned to use JeezzuhsCChrist in any sentence no matter what the subject.

Now, back to the look. The Rodeo Clown part comes from his knack for clothing combinations. Johnny is actually a very sought after fashion aficionado. One of his popular mantras is: “Don’t be afraid of combining too many patterns. Patterns are a way to express yourself and add that special flare to any ensemble.” Being that Johnny Starr is a country music icon, it is a must that all clothes have a western cut and make a statement. Another fashion hint from Johnny: “Shirt fronts and backs don’t need to match.” Perhaps red and gold bold stripes on the front and a wagon wheel on the back with one black arm and one red arm. Maybe a flame pattern on the front with a mountain scene on the back. It’s important to not be too conservative.

One thought on “Johnny Starr”